Yesterday I wrote of the prohibited claims that baby food companies in the UK are using on new formula labels. One of the companies responsible is Wyeth, makers of SMA. The company is based in Maidenhead, Berkshire. Baby Milk Action and others have reported the new labels as having claims that are not permitted under the Infant Formula and Follow-on Formula Regulations 1995. They also contain idealizing text and images, also prohibited by the law. This is despite the Food Standards Agency writing to the baby food companies reminding them they can only use the 6 claims as specified in the 1995 legislation.

Yesterday I said I was sympathetic to Trading Standards as they are over worked and under resourced, but I hoped they would bring prosecutions soon, particularly after the Public Health Minister said they had been encouraged to enforce the legislation.

News reaches me today, however, that the home authority for Wyeth/SMA is refusing to enforce the law.

According to the Trading Standards officer who relayed the decision of the home authority: "This was because the 1995 regulations are about to be revoked and replaced."

Draft revised regulations have indeed put out to consultation. But there are several key facts that make the decision by the home authority, which I understand to be Buckinghamshire County Council, a scandalous failure to fulfill their legal obligations.

Firstly, the Infant Formula and Follow-on Formula Regulations 1995 are still in force. They have been in force for 12 years and companies have been allowed to break the provisions during that time. At the end of 2006 the Food Standards Agency wrote to the companies reminding them of their obligations regarding labelling. The new labels have been much anticipated and it is absurd that having warned companies to abide by the 1995 law, no action is going to be taken as they continue to break it.

Secondly, the Minister for Public Health said just 3 weeks ago that Trading Standards had been encouraged to enforce the legislation. Here is the exchange with Lynne Jones MP recorded in Hansard:

---
Lynne Jones: To ask the Secretary of State for Health what action she is taking to encourage relevant authorities to prosecute companies that continue to make claims on infant formula labels and promotional material for baby milk which are non-compliant with current legislation. [143720]

Caroline Flint: The local authorities coordinators of regulatory services issued updated guidance in late 2006 to clarify the types of claims about infant formula that are prohibited. All local authority enforcement offices have been made aware of the new guidance and encouraged to enforce the United Kingdom legislation to ensure companies comply with the rules on claims.

How can we make sense of Trading Standards refusing to enforce the legislation?

Or is it Trading Standards that is unilaterally deciding to ignore the legislation?

This is what the message relayed by Trading Standards to a member of the public who had complained about the SMA label explains:

To conclude the home Authority Officer has a meeting arranged with the company on the 20th of July were the matters raised by you and others will be raised and discussions on the new regulations and their possible implications will take place.

Therefore as the regulations are the subject of an FSA consultancy with stakeholders at the present time and the home authority are aware of concerns re advertising and “idealise" no further actions will be taken at present. The situation can be re-assed in the light of any new interpretations/guidelines when the new regulations come into force.
---quote ends

The new regulations will come into force in 2008. There is likely to be a delay while guidelines are prepared by LACORS (the umbrella body for Traidng Standards). The regulations for the 1995 legislation took 2 years to finalise. So it could be 2010 before new guidelines appear. The industry then may be given a grace period of a few months to make any required changes and existing labels allowed to work through the system. Use-by dates may be up to 2 years in the future.

This means it could be 2012 before illegal labels are removed from the market if the Home Authority Trading Standards officer follows this route.

That to my mind is neglect of duty bordering on collusion with the company.

Refusing to enforce the law currently in force betrays infants and mothers.

Simply put, the rule of law no longer functions in this area - at least in Maidenhead.

Unless Trading Standards take legal action following up on the letter sent to the companies over 6 months ago these labels could be on the shelves for the next 5 years. Wyeth does not deserve to be treated with kid gloves. Remember the company already has a criminal conviction for a 'cynical and deliberate breach' of the regulations for illegal advertising of infant formula.

Although it is irrelevant for Trading Standards to talk about what possible future legislation will contain in refusing to act now, let us just consider what the draft, revised legislation has to say.

It can be downloaded at:
http://www.food.gov.uk/consultations/consulteng/2007/formulaengland2007

The relevant text in the draft is:

---Section 17 (extract)
(3) The labelling of an infant formula shall not include—
(a) any picture of an infant; or
(b) any other picture or text which may idealise the use of the product, but may include graphic representations for easy identification of the product or for illustrating methods of preparation.

Here is the relevant text from the existing law:

---Section 13 (extract)
(2) The labelling of an infant formula shall not include—
(a) any picture of an infant;
(b) any other picture or text which may idealise the use of the product,but may include graphic representations for easy identification of the product or for illustrating methods of preparation.

(3) The labelling of an infant formula shall include a claim concerning the composition of the product only when—
(a) the claim is listed in column 1 of Schedule 4, and is expressed in the terms there set out; and
(b) the condition specified in column 2 of that Schedule in relation to the relevant claim made in column 1 is satisfied.
---

The draft law and the existing law are exactly the same.

Trading Standards saying it has to wait for the new law to come in is a bogus argument that seems intended to shut people up complaining and to delay action.

(There have been some changes to the list of claims in Annex/Schedule 4, which is specified by the European Union, but it does not include the 'new improved protein balance' or 'easily digested' claims on the SMA formula).

There are idealizing text and images. Such as the slogan 'Love the milk you give', a new SMA logo incorporating a stylised breastfeeding woman and a photo of a woman.

This is the label. 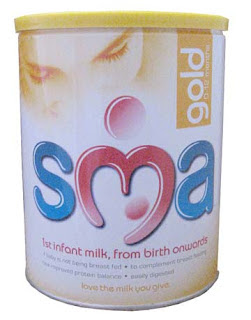 So there you have it. This label could be on the shelves until 2012 despite the fact it contains text and images prohibited under existing law and the draft revised law.

Despite the fact that a Government Minister has said Trading Standards have been encouraged to enforce the legislation.

The most frustrating part of this scandal is the following.

Trading Standards, backed with resources from the public interest fund of the Food Standards Agency, should be bringing a prosecution to have this - and the other non-compliant labels - removed from the market with immediate effect.

Instead, Baby Milk Action, a small organisation operating on a shoe-string budget, is now having to investigate taking action against Trading Standards for failing to carry out its statutory duties.

At present we have no funding for our UK-specific campaigning, so donations and merchandise purchases are welcome.

It looks like we are going to be busy on this one for a while yet.
Posted by Mike Brady at 6:05 pm