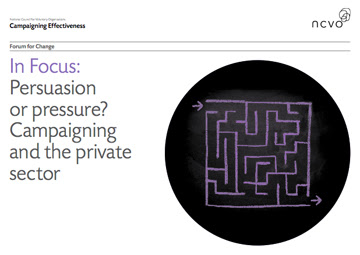 I was pleased to provide information to the National Council for Voluntary Organisations (NCVO) for a briefing it produced on Campaigning and the private sector - click here.

This includes profiles of the campaigning strategies of a range of organisations, including Amnesty International, Greenpeace and Baby Milk Action.

Although it includes in the title the question Persuasion or pressure? these are not mutually exclusive. Indeed, with some corporations it takes pressure to persuade them to act.

However, it is not always necessary to launch a public campaign to force changes. I often take up cases when I receive reports of websites or shops that are violating the International Code of Marketing of Breastmilk Substitutes and subsequent, relevant Resolutions of the World Health Assembly. Sometimes simply informing the people responsible that their bright promotional idea is a violation of the Code and Resolutions - and perhaps even illegal -is often sufficient.

With Nestlé, which we target with the boycott as it is the worst of the baby food companies, we also try persuasion by reminding it of its obligations under the Code and Resolutions. It usually takes an exposure campaign to force changes as it is reluctant to admit to violations. For example, it initially ignored our report about point-of-sale promotion in Africa, but agreed to crack down on the practice after members of the public took up the case (see our Campaign for Ethical Marketing action sheet, July 2009).

Our partners in the International Code Documentation Centre (ICDC) recently reported that a Nestlé lunch for health workers in South Africa was cancelled after they raised concerns with Nestlé Head Office. Although such events are common - and usually defended by Nestlé executives - there were possibly greater sensitivities in this case as the South African authorities are currently considering what action to take to implement the Code and Resolutions. You can read a report from ICDC on the website of the International Baby Food Action Network (IBFAN) - click here.

As the NCVO briefing explains, we use a broad range of strategies to put pressure on companies, but we also work for strategic changes in the regulation of corporations that will provide a level playing field for all companies and back regulations with enforcement methods. This involves working for new Resolutions at the World Health Assembly, to address changes in marketing practices and scientific knowledge, and encouraging governments to implement the Code and Resolutions at the national level in independently monitored and enforced legislation. Achieving legislation is a major activity of ICDC, working with the IBFAN network as a whole. The strategy has been so successful that the industry itself is complaining of 'constraints' in countries such as India where the formula market has barely grown over the last decade, in contrast to China, where there is a weak code of conduct and sales have surged ahead. Industry analysts Euromonitor note (see Update 42): "The industry is fighting a rearguard action against regulation on a country-by-country basis."

That could explain why Nestlé wants to look responsive to complaints in South Africa at present. Its stated policy is to encourage governments to go for voluntary measures to implement the Code and Resolutions - rather than legislation with meaningful sanctions (which in the case of India's exemplary legislation include imprisonment of the Managing Director).

Introducing - and defending - legislation is no easy task. We have reported in the past how it took an international campaign to defend new baby food marketing regulations in the Philippines in 2007 (see Philippines Victory in Update 40). We have recently learned through the exposure of US diplomatic cables by Wikileaks that we not only faced the machinations of the baby food companies and the US Chamber of Commerce threatening to disinvest from the Philippines, the US Government was also putting pressure directly on the Philippines Government to weaken regulations drafted to protect infant health (see ABS-CBNNews report). That the regulations came in largely unscathed despite this pressure is a direct result of campaigning, nationally (including a petition shown left) and internationally (with petitions of support and other action). The main Philippines broadsheet put the campaign on its front page as a result of international concern, quoting a message from someone who had signed Baby Milk Action's petition in its report, showing how individual action can help to save lives on the other side of the world.

Where national measures are lacking or ineffective, we have argued that the global community has a responsibility to act. How this could operate in practice is something I explored in depth in a chapter I wrote for the book Global Obligations for the Right to Food as part of a Task Force of the UN System Standing Committee on Nutrition - click here to order.

At present, the best we have at the international level is the UN Global Compact and the OECD Guidelines for Multinational Enterprises. We have been pursuing complaints about Nestlé human rights abuses under both measures for the past two years and found them to be ineffective and in need of replacement or reform. In the case of the UN Global Compact, it is actually counterproductive as it provides public relations cover for companies by posting their social responsibility reports on the official website without any form of checking. In the case of Nestlé, the Global Compact Office even takes part in joint launch events and accepts Nestlé as a Patron Sponsor of prestige events, such as its 10th anniversary celebrations in New York last year. See our press release: UN Global Compact - 10 years of helping cover up corporate malpractice.

In recent weeks, Baby Milk Action has brought together over 140 citizens groups in the Conflicts of Interest Coalition to ensure that policy making on health issues, such as Non-Communicable Diseases, is pursued in the public interest. It is an uphill struggle as corporations not only have massive lobbying resources, but a revolving door operates between their staff and government and United Nations staff in many areas.

So campaigning continues to be essential: when policy makers fail to hold corporations to account, it falls to us - you and me, together with many other people around the world - to do so.

Posted by Mike Brady at 7:13 pm No comments:

Baby Milk Action recently formed the Conflict of Interest (COI) Coalition, bringing together - so far - over 140 international networks and civil society organisations calling for the United Nations to avoid conflicts of interest as it sets policies on obesity, diabetes and other Non-Communicable Diseases (NCDs).
The Coalition represents thousands of non-profit public health advocacy groups around the world.
It is necessary because food corporations such as Nestlé and alcohol companies companies are lobbying to set the rules on tackling the rise in NCDs for which they are partly responsible. Pharmaceutical companies that can also profit from policy decisions are also involved in lobbying. All want to be seen as 'partners' in tackling the problems.
The COI Coalition is calling for there to be a Code of Conduct on relationships so that policies are made in the public interest. While corporate interests can be consulted, they should not be involved in setting the policies or these will inevitably be weakened to protect corporate interests, instead of protecting health.
The corporations are out in force this week at the UN General Assembly where these issues are being discussed. Baby Milk Action's Policy Director, Patti Rundall, is also there, with colleagues in the COI Coalition.
You can follow developments on the new COI Coalition blog at:
http://coicoalition.blogspot.com/
and Patti's own Policy blog at:
http://info.babymilkaction.org/news/policyblog
Posted by Mike Brady at 8:44 pm 3 comments: