The UK Government has convened a panel to review the effectiveness of the Infant Formula and Follow-on Formula Regulations which have been updated and came into force (except for some provisions) earlier this year. We submitted a monitoring report to the panel in May and hope to submit further reports (we are seeking funds and donations for this work). You can see the monitoring report, and submit examples of companies pushing formula in the UK, via:
http://www.babyfeedinglawgroup.org.uk/monitoring.html

We sent the last report to the Trading Standards offices responsible for enforcing the regulations on each company. As I wrote yesterday, the home authority for Nestlé has told it it needs authorisation from the Department of Health for a video it is distributing, which is a small sign of progress. See:
http://boycottnestle.blogspot.com/2008/09/nestle-breastfeeding-video.html

On the whole, however, as the monitoring shows, companies are getting away with promoting formula as if it was confectionery or shampoo, rather than a nutritional medicine. As long as they stick the words 'follow-on' somewhere in the advertisement they escape through loopholes in the law. They can also target mothers directly with apparent immunity. This is because the Government ignored the recommendations from health advocates and its own expert advisers when revising the law. The review panel provides another chance for the law to be brought at least a little closer towards the World Health Assembly marketing requirements for baby foods which the companies should be abiding by independently of government measures.

The report we prepared for the Baby Feeding Law Group, a coalition of UK health worker and mother support groups, sets out what the government needed to do and the benefits this would have brought to infant health and the economy. See:
http://www.babymilkaction.org/shop/publications01.html#bflgsubmission

How serious are the consequencies of the Government failing to act on our recommendations and those of its own advisers, is demonstrated by a simple fact: the introduction of the law is leading to MORE promotion not less. The evidence comes not only from our monitoring, but from the fact that Wyeth, producer of SMA formula, is not only maintaining its £ 3 million advertising budget, but seeking a new deal for direct marketing its formula to mothers.

LONDON - SMA Nutrition, the baby milk formula brand, is on the hunt for an agency to handle its direct marketing account.

The Wyeth-owned breast milk supplement has approached a number of undisclosed agencies with a view to holding chemistry meetings later this week. The pitch is being overseen by the AAR.

According to an SMA spokeswoman, the company plans to shortlist 20 agencies for the brief, with a result expected in July.

Publicis, which secured the £3 million SMA advertising account in April last year, is not affected by the review.

The successful agency will promote the formula in the wake of impending plans to implement a European directive limiting the approved health claims formula brands can make and preventing them advertising directly to parents.

If only it were true that the UK implementation of the Directive prevented them advertising directly to parents. This is what the World Health Assembly measures require, as they give health workers responsibility for advising parents and providing objective, independent information.

The UK could have prohibited the advertising of follow-on formula (so closing the loophole mentioned above) if it had wished to do so. Other European countries have done so. But it followed the industry plea to do the minimum possible so advertising continues and direct targeting of pregnant women is set to increase. Indeed, Wyeth is already stepping up activity in this area, with leaflets such as this one, found in a health centre, which encourages mothers to contact Wyeth for information on infant care and promotes the SMA formula brand name. 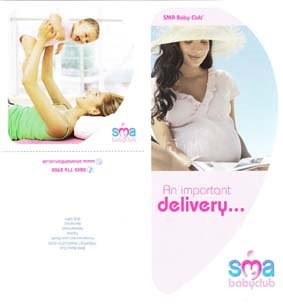