Contaminated baby milk is not just a Chinese problem

I wrote on Monday about the tragedy in China where over a thousand babies have become ill and two have died because of contamination in the milk used to make the formula, produced by a New Zealand/Chinese company. See:
http://boycottnestle.blogspot.com/2008/09/china-formula-deaths.html

One of the things that struck me as odd in some of the coverage is that aspersions are being cast on Chinese goods as a whole. Nestlé recalled formula after a child died in Belgium, but the headlines weren't criticising Swiss goods (and Nestlé didn't recall the formula everywhere, because the order from the European Food Standards Agency didn't extend to Switzerland).

The contamination in that case was Enterobacter Sakazakii. Powdered formula is not sterile and contamination is worryingly common, though deaths are fortunately rare and the steps to reduce risks are straightforward. Unfortunately Nestlé and other formula companies continue to refuse to provide this information to parents on labels, instead boasting (in Nestlé's case) that its formula 'protects'. See:
http://boycottnestle.blogspot.com/2008/07/nestle-driving-standards-down.html

The International Baby Food Action Network (IBFAN) - we are the UK member - tracks product recalls as a service of its contaminants working group. See:
http://www.ibfan.org/site2005/Pages/article.php?art_id=85&iui=1

For example, the Austrian Agency for Health & Food Safety tested products on 11 July 07 and found the following contaminated with Enterobacter Sakazakii:

Other recalls in 2008 are a recall of Natur and Confort formula in Spain found to be contaminated with Salmonella Enterica and Nestlé's formula in South Africa which had excessive levels of copper, iron and zinc due to a mixing error.

It is the nature of mass produced food products that manufacturing errors will occur. Baby Milk Action and our partners in the Baby Feeding Law Group have been calling for the UK government to have a better system for monitoring cases of contamination and receiving reports of concerns. IBFAN works for this globally.

With present technology at least, it is the nature of powdered formula that it is not sterile and may be contaminated with harmful pathogens such as Enterobacter Sakazakii and Salmonella.

This is the double risk of formula over breastfeeding. Formula is not only more likely to introduce infections to vulnerable infants, it denies them the protective factors of breastmilk. While it is an essential product and saves lives in certain circumstances, these risks should be appreciated.

This Danone television advertisement for Cow & Gate formula which the UK Advertising Standards Authority is currently considering not only hides these risks, but misleads mothers into believing the formula provides protection. 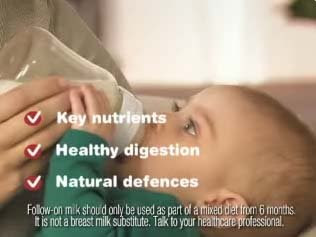 While the media will often seize on reports of chemical residues being found in breastmilk, sensationalist reports that put some mothers off breastfeeding, miss the fact that more significant passing of chemicals from mother to baby happens in the womb and breastfeeding - with breastmilk from the same 'contaminated' mother - is the most effective way to reduce that chemical load. IBFAN's working group on residues in breastmilk has additional information. See:
http://www.ibfan.org/site2005/Pages/list2.php?parent=4&cat_id=121&iui=1
Posted by Mike Brady at 2:32 pm

I've emailed the BBC today about its coverage. If I get an answer I will post it here.

Here's what I have said:

"I am surprised that in all the coverage of the contaminated milk powder in China, there is no mention of breastfeeding.

I've been following Cow and Gate and blogged about the influence you've been having on their reputation. Thought it might be of interest and grateful for any feedback / observations.

I think eating period these days. Let alone having to feed your kids and finding out milk and formula isnt even safe. I mean how does this happen shouldn't it be an easy fix? And if your having a child why not promote breast feeding it is free and probably safer depending on what their eating. I would hope breast feeding is promoted in china.