As I mentioned yesterday, the responses to the UK consultation on Guidance Notes to accompany our new formula regulations have been published.

The baby food industry has objected to many provisions, including the recommendation that labels warn parents that powdered formula is not sterile and how to reduce the risks from possible contamination with harmful bacteria.

Here is something else the industry does not like. This is the British Retail Consortium:

---
We also feel that the guidance goes beyond the legislation suggesting best practice guidance. The purpose of the guidance should be made clear. We arespecifically concerned about paragraph 49 of the guidance which suggests that‘shelf-talkers’ and other in-store promotional devices for follow-on formulae are not used in the vicinity of infant formulae. We are especially concerned about the unreasonable suggestion that a follow-on formula has to be located in a different part of the store to infant formula. This is gold plating, as this is not laid down in the legislation. As best practice this proposal is completely unjustified.
---

Well, let's see why the authorities think it is justified. Here is an example of promotion in Tesco in Cambridge: 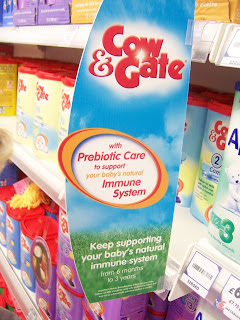 Companies use claims that are illegal on infant formula to draw attention to the formula section of supermarkets, in this case, Tesco.

The claim 'with prebiotic care to support you baby's natural immune system' is illegal on infant formula (for use from birth). When a similar expression was used in an advertisement for follow-on formula (for use from 6 months), the Advertising Standards Authority investigated and found it was not substantiated by scientific evidence.

This is the objection raised by the Infant and Dietetic Food Association (IDFA):

---
49 Goes beyond the legislation, the proposal to locate infant and follow-on formula in different parts of store may readily lead to confusion amongst parents who may start to introduce inappropriate foods and drinks to the diet of a six month old infant e.g. cows’ milk etc if the existence of follow-on formula is not clear to them. In addition, this is simply not practical in small stores like convenience stores, corner shops and pharmacies.
---

This argument is a little bizarre. The position of the World Health Assembly and the Department of Health is that follow-on formula is an unnecessary product. It was introduced as a strategy to by pass the marketing restrictions placed on infant formula. There is no reason why infant formula cannot be used beyond six months with the introduction of other foods if a child is not being breastfed.

The real reason companies want to keep infant feeding products together is so promotion for follow-on formula also draws parents to the infant formula, similarly branded and labelled and on the same shelves. They also want to capture customers, so they progress from the infant formula, to the follow-on formula and complementary foods, all similarly branded. Our 2004 report Checks and Balances in the Global Economy contains the following:

---
The Sales Director of Cow and Gate/Milupa, Ian Thomas, is quoted as saying in 1997: ‘We suggest milk is merchandised on the left hand side of the fixture, followed closely by an early weaning block – jars and packet foods from 4 months – to stop mums drifting into home-made foods.’
---

Placing the follow-on formula elsewhere disrupts these marketing strategies, which could impact on how successfully companies undermine breastfeeding and cost the companies money. Which is their real concern.
Posted by Mike Brady at 11:01 pm

I see that both HIPP and IDFA complained about the prohibition of advertising in healthcare professionals' journals. They claim health visitors and midwives will be deprived of information.

They really do seem to have no grasp of the difference between advertising and information.