As our press release on the boycott demonstrations on Saturday mentioned, a member of the Scottish Parliament, Elaine Smith MSP, introduced a motion calling for a re-think of contracts awarded to Nestlé to supply bottled water.

According to a report in the Scottish Sunday Express (18 May) some of the 5 councils known to have contracts, worth a reported £ 5 million, are starting to do so. Indeed, one has responded to complaints about the supplier and already switched. We have seen previously that if a council assumes responsibility to provide bottled water and significant numbers of people object to it being sourced from Nestlé, the council has legitimate grounds to switch suppliers.

Here is the cutting from the paper (click on it for larger version): 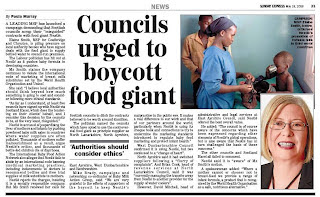 As I said in my quote, used by the paper: "We are very grateful to the efforts of supporters of the boycott to keep Nestlé malpractice in the public eye. It makes a real difference to our work and that of our partners around the world, particularly when Nestlé is using its cheque book and connections to try to undermine the marketing standards introduced to regulate baby food marketing practices and protect infant health. "

Many thanks to everyone who went out leafleting. Please do send us pictures. Thanks to Jean Rowe for these from the demonstration at Nestlé (UK) HQ in Croydon. 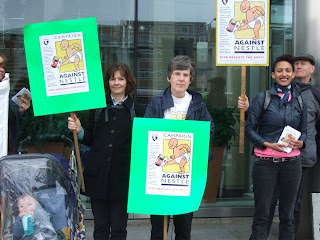 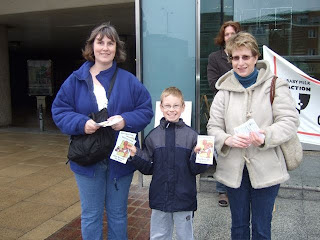