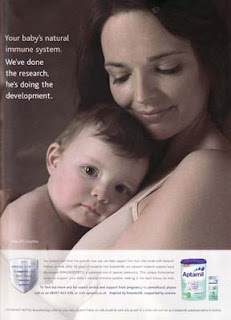 Nearly two years ago I asked the Advertising Standards Authority (ASA) in the UK to investigate claims made in an advertisement for Aptamil follow-on formula.
The advertisement claimed that Aptamil is the 'best follow-on formula'. Is this true, I asked, considering that all companies claim their formula is the best? When claims are made in an advertisement, they have to be 'legal, decent, honest and truthful' according to the voluntary advertising code.
I also queried the claims made about IMMUNOFORTIS in Aptamil. This is a made up name for a type of oligosaccharide added to the formula (which is called a 'prebiotic' by the company, though this is not an allowed term in the UK marketing law).
I wanted to know whether the claims "This unique formulation helps to support your baby's natural immune system …" and "Intensive work has shown that immunofortis … supports your baby's natural immune system" could be substantiated.
Well, after two years of investigation by the ASA and much wrangling with Danone/Milupa, the makers of Aptamil, the verdict is in.
The company has been told not to repeat the claims and has been found to have breached the advertising code clauses on substantiation, truthfulness and comparisons.
So no, Aptamil is not the best formula and its formula does not support the natural immune system. The company has misled parents.
It has continued to make these and other claims during the two-year investigation and may well continue to make them in other materials and on labels, because they are not covered by the ASA, which is only a voluntary system of regulation in any case.
So while Danone/Milupa has been found to have misled parents, the UK law will allow them to carry on doing so elsewhere.
That's why we - along with just about every other organisation working to protect health and mothers' rights - is calling for the UK Government to implement international minimum marketing standards in the UK.
And it is why we are calling for the Government to ensure that parents who want to know which formula is the best and about the ingredients it contains are able to obtain independent, objective information.
You can't trust companies that want to flog more formula to tell the truth to customers. Don't take my word for it. Look at the ASA ruling.
Find further information on our press release at:
http://www.babymilkaction.org/press/press22july09.html
You can send a message to politicians around the world calling on them to protect breastfeeding and protect babies fed on formula at:
http://www.onemillioncampaign.org/
Update February 2010: For Baby Milk Action's guidance on choosing formula, see:
http://info.babymilkaction.org/infant_feeding/formulafeeding
Posted by Mike Brady at 12:01 am

Don't they currently have a TV ad with a baby glowing in a Ready Brek or radioactive way, supposedly showing "Immunofortis" "supporting baby's immune system" ?

Hi, as a breast feeding mother who on occasion has had to defend my decision to go the natural way, because there are so much advertising out there that claims formula is just as good, if not better then what nature intended. (!) I find it highly offensive that the new packaging on Aptamil 1 has a big shield at the front of the package where it states "Breast milk substitute"

How is this allowed, as it's very misleading, and I imagine for somebody who is undecided about breast feeding, this could convience them bottle feeding is the way to go.

Don't get me wrong, I appreciate that some mothers can't feed their babies themselves and I support the choice of individuals so there should always be an option.
But there is still a long way to go towards changing peoples attitude towards breast feeding, and as we are soon to gain 12 months paid maternity leave (hopefully) there is not the rush to get the baby on the bottle so you can rush back to work either.

So I think a lot more has to be done to support breast feeding, and removing statements like "breast milk substitute" from formula packaging goes a long way.