I wrote last week of the new global baby food marketing monitoring report from the International Baby Food Action Network (IBFAN). The UK looks particularly bad in it, thanks to the failure of our government to introduce the World Health Assembly marketing requirements introduced by many other countries.

Nestlé also comes out very badly as its claim to abide by the requirements is shown to be false.

One practice highlighted in the report, which I included on this blog, was its branding of babies in China. Here's a pic:

This has been picked up and reported on a trade website, where the practice has been defended by Nestlé. See:
http://www.nutraingredients.com/news/ng.asp?n=81843-nestle-heinz-who-bma-infant-nutrition

Here is an extract:

---Quote begins
But Nestle this morning hit back at those claims and said that under the WHO code they were allowed to donate equipment and materials to healthcare systems "with a company's name and logo - but not with a formula product name or brand."

A spokesperson told NutraIngredients.com that the: "are provided as a service to the hospitals with their approval, and is completely permitted."

He added that Nestle "firmly believes that breast-feeding is the best way to feed a baby and we are strongly committed to the protection and promotion of breast-feeding."
---quote ends

Before getting into the provisions of the marketing requirements, let's just take the above at face value.

Nestle is suggesting that putting its name and logo onto newborn babies has nothing to do with it wanting to promote its products - and the only product relevant to a new-born child being infant formula.

Really? Then why on earth does it want them there? Why, now that it has been criticised, is its response to defend the practice, rather than to remove it?

For the simple reason it is part of a marketing strategy and one which it want to carry on investing in.

There are various provisions of the International Code of Marketing of Breastmilk Substitutes and subsequent, relevant Resolutions of the World Health Assembly that are relevant.

Article 6.8 states: "Equipment and materials... donated to a health care system may bear a companys name or logo, but should not refer to any proprietary product within the scope of this Code."

This is the article to which Nestle is referring.

However, try this experiment. Take a look at Nestlé products on the shelves. You will not see the Nestlé logo and name which appears on the wrist bands in China on the front of the products - with one exception. It is on the infant formula. Other products sometimes have the Nestlé name on them, but the logo is hidden away, so much so that most people don't notice it. That is even the case with the milks for older children. It is only on the formula that it features prominently, as on the wrist band. Take a look and let me know if I am wrong.

Nestlé is developing the logo even further to associate it even more closely with infant formula. Here is an example of a Nestlé poster, shown in the IBFAN report, ostensibly for breastfeeding:

As with the wrist band, this features the Nestlé name and logo prominently.

Now look to the formula. The Nestlé name and logo have grown substantially in recent years.

Indeed the more realistic rending of the bird and nest logo used on the poster is specific to formula packaging - so clearly within the scope of Article 6.8. Here is an example from the Breaking the Rules report showing a label: 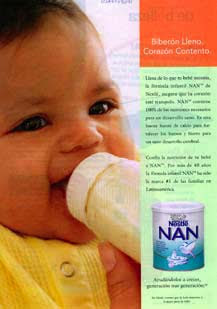 The formula bird and nest logo is as on the poster in China, and dominates the label as much as the formula brand. Above it is the conventional logo, as on no other product.

Here they both are again on formula in the Philippines, exposed in our campaign here and in the Breaking the Rules report:

The logo - and the Nestlé name - will be associated with the formula.

As the report notes, some countries, such as Tanzania have prohibited the large bird and nest logo, seeing it as an attempt to get around restrictions on idealizing images - the reason why Nestlé introduced it.

There is also the issue of conflicts of interest. Nestlé claims that in China the donation had approval. Yet, Article 11.3 of the Code says companies are responsible for complying independently of government measures.

Resolutions 58.32 calls for care : "to ensure that financial support and other incentives for programmes and health professionals working in infant and young-child health do not create conflicts of interest."

Nestlé claims to back breastfeeding. Indeed in the advertisement pictured above, the small print also says : “At Nestlé, we believe breastfeeding is the best for babies”.

The large print is a little different. The advertisement is from a Spanish magazine in the United States. It states: "“Entrust the nutrition of your baby to Nan. For over 40 years Nan infant formula has been the number 1 brand for Latin American families”. A slogan beneath a packshot of Nan says “Helping them to grow from generation to generation”.

Article 5.1 states: "There should be no advertising or other form of promotion to the general public of products within the scope of this Code."

So such advertising is a clear breach of the the marketing requirements. Though Nestlé may choose to disagree.

Find many more examples in the Breaking the Rules report at:
http://www.ibfan.org/site2005/Pages/article.php?art_id=510&iui=1
Posted by Mike Brady at 11:18 pm

Well done, Mike. The argument by Nestle is indefensible. If the company really wants to support hospitals without getting accused of promoting its own name and thereby products, why doesn't it give bandages or diapers to geriatric wards?