It's nice to actually be able to congratulate the UK authorities for setting an example - that is a good one - to the rest of the world, instead of whinging about the pretty useless implementation of the World Health Assembly marketing requirements in the UK. Sure, baby food companies get away with aggressive marketing in the UK which would see Chief Executives imprisoned in countries such as India, but let us set that to one side for now.

The UK authorities have cracked down on illegal health claims on labels and in advertising and for that we, and many others, are grateful. See:
http://boycottnestle.blogspot.com/2007/03/letters-that-took-12-years-to-write.html

The example is helping health advocates around the world, particularly in those countries that are trying to introduce similar measures but are finding the industry is not accepting the regulations. In the UK companies have agreed to change and the labels are now coming onto the market. In the Philippines some of the same companies have taken the Department of Health to court and have successfully blocked regulations.

Wednesday (25 April 2007) there was a major article in the Manila Bulletin in the Philippines on the crackdown on illegal health claims in the UK. This has been archived on a government website. See:
http://www.pchrd.dost.gov.ph/library/
index.php?option=com_content&task=view&id=235&Itemid=27 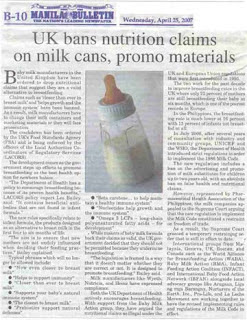 Here is part of it:

While makers of baby milk formula back their claims as valid, the UK government decided that they should not be permitted because they undermine breastfeeding.

"The legislation is framed in a way that it doesn’t matter whether they are correct or not. It is designed to promote breastfeeding," Bailey said.

Both the UK Department of Health activity encourages breastfeeding. Witth support from the Baby Milk Action group, they have argued the nutritional claims as illegal under the UK and European regulations that were first introduced in 1995.

The two work for the past decade to improve breastfeeding rate in the UK where only 22 percent of mothers are still breastfeeding their baby at six months, which is one of the poorest records in Europe.

In the Philippines, the breastfeeding rate is much lower at 16 percent with 13 percent of infants not breastfeed at all.

In July 2006, after several years of cosultation with industry and community groups, UNICEF and WHO, the Department of Health introduced strict regulations in order to implement the 1986 Milk Code.

The new regulation includes a ban on the advertising and promotion of milk substitutes for children up to two years old, with an absolute ban on false health and nutritional claims.

However, represented by Pharmaceutical Health Association of the Philippines, the milk companies appealed to the Supreme Court arguing that the new regulation to implement the Milk Code constituted a restraint on freedom of trade.

As a result, the Supreme Court granted temporary restraining order that is still in effect to date.

Wyeth has already launched its new labels. While most claims have gone, others, which we believe are also illegal, appear. And Wyeth's new SMA logo incorporates a breastfeeding mother to suggest equivalence of the formula with breastfeeding. We are encouraging the authorities to act. See:
http://boycottnestle.blogspot.com/2007/04/sma-plans-new-close-to-breastmilk.html

A quick check to the supermarket today shows that Heinz has changed its Farley's labels, removing the 'closer than ever to breast-milk' claim (though keeping its teddy bear, an idealizing image prohibited by the Code and Resolutions).

Numico has also changed its Cow&Gate labels, removing its 'now even closer to breastmilk' slogan and claim the 'prebiotics support the immune system' (instead saying 'prebiotic care').

Here is a graphic illustration of the Cow&Gate change in the Tesco in Ely: an pack of old formula, surrounded by the new one. 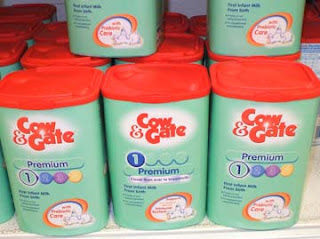 Click here for a larger version. You will see how the slogan has gone and the prebiotic claim changed. Again they have a prohibited teddy bear image. I'll give a fuller analysis of the new labels in a while, but we are seeing an end to the worst of the idealising claims.

So well done to the authorities in the UK.

Let us hope the Supreme Court in the Philippines will back the Department of Health there, a country where 16,000 infants die every year as a result of inappropriate feeding.
Posted by Mike Brady at 9:30 pm

Hi, I dunno how to reach you by email. I just want to inform you that a few moms in Indonesia are protesting against Nutricia for their latest formula campaign, by sending letters to the Nutricia director and local news paper. Quoted below is the letter to Nutricia Director.

As you know, manufacturers of baby foods should abide by the
provisions of the International Code of Marketing of Breastmilk
Substitutes and subsequent, relevant Resolutions of the World Health
Assembly.

I am very concerned and shocked to see your latest advertising
campaign that was aired on Trans TV, Wednesday 25 April 2007 at
5.45pm, for the product NUTRILON ROYAL 3 with Immunofortis
("Product"). The ad clearly compared breatmilk to artificial milk,
claiming that breatmilk provides the best immunization during the
first years of life, but that as the child grows older, the Product
provides Immunity For Life (suggesting that breastmilk does not).

Researches have shown that breastmilk provides optimum, and the best
immunization not just during the early years of a child's life, but
even throughout childhood and adulthood. Breastmilk lowers the risks
of various diseases and illnesses, among others: (1) childhood
leukimia and lymphoma, (2) juvenile onset diabetes, (3) bowel
diseases and diarrhea, (4) ear infections, respiratory infections,
pneumonia, asthma and eczema, (5) bacterial meningitis, (6)
adulthood rheumatoid arthritis, (7) osteoporosis, (8) breast cancer
and ovarian cancer, (9) lower cholesterol, and (10) childhood and
adolescent obesity.

In light of the overwhelming facts supporting the evidence of
LIFELONG IMMUNIZATION BENEFITS (Immunity For Life) of breastmilk, I
ask that your company instantly stop any and all public airing of
this most recent media campaign, including each and every print and
electronic advertising that directly or indirectly depicts
breastmilk as inferior to, or even the same as artificial milk.

I also ask that you act immediately to review your baby food
marketing practices and end any and all violations of the
International Code and Resolutions immediately.

Please confirm that you will take this action.