Infant feeding information in the Philippines

I wrote recently about the way the pharmaceutical industry in the Philippines was backing its legal challenge on the government’s baby food marketing regulations with a media campaign. Its advertisements in themselves undermine breastfeeding, while arguing that mothers require information. See:
http://boycottnestle.blogspot.com/2007/02/media-studies-in-philippines_23.html

UNICEF, WHO and our partners in the International Baby Food Action Network (IBFAN) from Canada (INFACT Canada) have just run an advertisement giving information on infant feeding.

This references scientific studies to highlight the health impact of infant feeding methods. As I wrote recently, there needs to be sensitivity in speaking of the health risks of formula feeding because for some there would have been no choice but to formula feed and a reminder of the health effects can be distressing. For others, formula-feeding may have seemed little more than a lifestyle choice as companies boast of the properties of their formula, claiming they are ‘close to breastmilk’. In the Philippines Nestlé claims its formula contains ‘Brain Building Blocks’ giving the impression formula-feeding improves intelligence. Such claims are prohibited by the International Code of Marketing of Breastmilk Substitutes and subsequent, relevant Resolutions of the World Health Assembly. They have been illegal in the UK for over a decade and the UK authorities have recently given companies notice that such claims are prohibited. We hope the Philippines court will similarly take strong action in standing up to corporate malpractice and will defend the government’s implementation of the World Health Assembly measures. See:
http://boycottnestle.blogspot.com/2007/03/uk-health-claims-action-example-to.html

The advertisement run by UNICEF, WHO and INFACT Canada, which appeared in the Philippines Daily Inquirer yesterday (26 March 2007) is shown below. 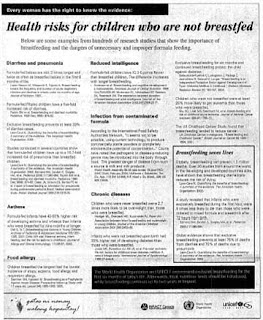 When companies claim their formula is ‘close to breastmilk’ this gives a misleading impression. In the UK, a Department of Health survey published in 2005 found that 34% of mothers incorrectly believe infant formula is the same or similar to breastfeeding.

UNICEF, WHO and INFACT Canada declare in their advertisement: “Every woman has the right to know the evidence”.

Points highlighted, with reference to key studies, are as follows:

Formula-fed babies are sick 3 time longer and twice as often as breastfed babies in the first 6 months of life.

Formula-fed Filipino children have a five-fold increased risk of diarrhoea.

Studies conducted in several countries show that formula-fed children have up to a 16.7-fold increased risk of pneumonia than breastfed children.

Formula-fed infants have 40-50% higher risk of developing asthma and wheeze than infants who were breastfed for nine months or longer.

Children breastfed the longest had the lowest incidence of atopy, eczema, food allergy and respiratory allergy.

According to the International Food Safety Authorities Network, “It seems not to be possible, using current technology, to produce commercially sterile powders or completely eliminate the potential of contamination.” Courts have noted that pathogenic or disease-producing germs may be introduced into the body through food. The greatest danger of disease from such a source is milk or milk products.

Children who were never breastfed were 2.7 times more likely to be overweight than those who were breastfed.

Infant who were not breastfed upon birth had 33% higher risk of developing diabetes than those who were breastfed.

Children who were not breastfed were at least 25% more likely to get leukaemia than those who were breastfed.

Globally, breastfeeding can prevent 1.3 million deaths. Over 30 studies from around the world, in the developing and developed countries alike, have shown that breastfeeding dramatically reduces the risk of dying.

A study revealed that infants who were exclusively breastfed during the first hour, were 9 times less likely to die than those who were initiated to mixed formula and breastmilk after 72 hours from birth.

Global evidence shows that exclusive breastfeeding prevents at least 75% of death from diarrhoea and 70% of deaths due to pneumonia.
---ends

The pdf version of the advertisement can be downloaded by clicking here and gives the references for the above statements.

The World Health Assembly marketing requirements and the Philippines government's implementation of them are intended to ensure mothers receive accurate information free from commercial pressure.

While formula is intrinsically inferior to breastfeeding, some action can be taken to reduce risks, particularly risk due to intrinsic contamination with pathogens such as Enterobacter Sakazakii, which is worryingly common.

For information on how to reduce the risks of formula feeding and for information on dealing with breastfeeding problems, see the leaflets produced by UNICEF and contact your health worker. In the UK, mothers can contact mother-support groups. Click here.
Posted by Mike Brady at 11:00 pm