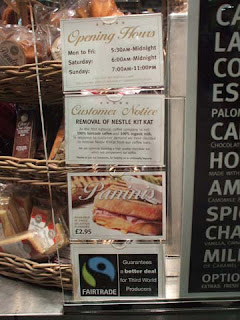 It's a sign about the removal of Nestlé Kit Kat chocolate bars. 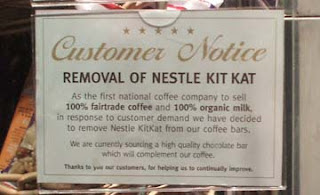 Nestlé has launched its own Fair Trade coffee in some of the countries where the boycott is particularly strong (UK, Ireland and Sweden so far) as part of a public relations strategy to try to improve its appalling image. For how Nestlé is using its one and only Fairtrade product during the current Fairtrade fortnight see:
http://boycottnestle.blogspot.com/2007/03/nestl-fairtrade-whitewash-2007.html

AMT says it decided to remove Nestlé Kit Kat from its coffee bars 'in response to customer demand'. It is seeking an alternative that fits with its support for Fairtrade.

One way to promote the boycott is to fill in customer comment cards where Nestlé products are sold or send messages via company websites. And when companies do look for alternatives, as AMT has done, send a message of congratulation.

When it comes to Nescafé, the principal target of the boycott, we have small cards which you can leave at places if you don't want to raise the boycott with the management. This has a space for you to write in your preferred brand. Available in our on-line Virtual Shop. See:
http://www.babymilkaction.org/shop/boycott.html#nothanks
Posted by Mike Brady at 11:30 pm