Headlines claiming that scientists have produced 'breastmilk' from Genetically Modified (GM) cows should sound alarm bells for policy makers as they vote this week in the European Parliament on whether to improve measures for approving health claims on formula. Firstly, this story demonstrates once again that existing formulas lack many of the components found in breatmilk, three of which the researchers claim now to be able to produce from different GM cows. Given the existing misleading claims that formula companies put on labels, about how their formula boosts the immune system and supports brain and eye development for example, over a third of parents already believe formula is "very similar or the same" as breastmilk according to a survey by the UK Department of Health. Secondly, the GM cow's are not producing 'human breast milk' (hence the quotes in the reports), but are potentially a source of some of the missing components. Other components, some of which may still need to be discovered, and living substances, are not being produced by the cows and the milk will still require subsequent processing even if it was found to be beneficial and safe (aside from animal welfare and environmental considerations).

Members of the European Parliament will be voting on a Resolution on Wednesday 6 April about the approval process for health claims and deciding whether to block a claim for an ingredient, DHA, generally produced by microalgae fermentation. Companies claim this is important for eye and brain development, but independent research has found "no proven benefit" from adding it to formula - if there was, it would have been made a required ingredient in the European Union's composition regulations. The industry is lobbying hard to stop the Resolution from the Environment, Public Health and Food Safety Committee from being approved by the full Parliament. Click here to send a message to your representatives in the European Parliament.

Here is a quote from Mike Brady, Campaigns and Networking Coordinator, Baby Milk Action for any journalists that need one:

"Every time we see these types of headlines it reinforces the fact that formula currently on the market is not the same as breastmilk and scientists are still seeking ways to reduce its shortcomings - yet misleading claims made on labels and in advertising have convinced a third of parents in the UK that existing formula is the 'very similar or the same' as breastmilk. The Advertising Standards Authority has already ruled against claims that formula boosts the immune system and the suggestion these cows are producing 'human breastmilk' is just as misleading - scientists are actually claiming they have found a way to produce three components missing from current formulas and change fat and protein levels. This is not going to be a living substance tailored to the baby like breastmilk. Baby Milk Action is working for the composition of formula to be improved for those babies who are not breastfed and it will be interesting to see if the missing components that these scientists claim to be able to produce can be proven to be beneficial and safe if included in a formula. The European Parliament has the chance to vote on Wednesday 6 April in support of a Resolution from the Environment, Public Health and Food Safety Committee that will improve the process for approving health claims and block misleading claims. I urge all MEPs to vote in favour of the Resolution."

To protect babies fed on formula we need to look behind the hype and put in place a system that requires benefits and safety to be proven. If ingredients are beneficial and safe, they should not be promoted with marketing claims, but required as an ingredient in all formulas, so inferior formulas are not being fed to babies. This chance of a mass market attracts investors backing new wonder ingredients to add to formula, but policy makers need to keep clear heads and do what is right for infant health - and in this case, also consider the animal welfare and environmental issues. 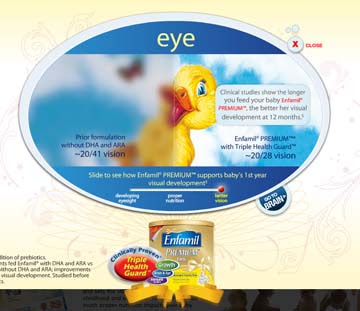 The current regulatory system means that companies can add ingredients to formula and make health claims about them, at least on follow-on formula, without evidence of benefit. In the case of DHA, in 1996 investment advisors Hambrecht & Quist suggested investing in Martek Bio-sciences Corporation, that had developed Formulaide, an additive produced by microalgae fermentation, saying:

"Even if Formulaide (DHA/AHA) had no benefit we think that it would be widely incorporated into most formulas as a marketing tool and to allow companies to promote their formula as ‘closest to human milk’."

Beware of the hype. Left: Mead Johnson suggests its formula improves babies eye sight, although there is 'no proven benefit' from adding DHA to formula.

Baby Milk Action takes the view that if there truly is evidence for a health claim that should trigger a review of the list of ingredients required in formula by law and the evidence - including a substantial amount of independent research, not just company-funded research - should be examined. This happened when the EU Infant Formula and Follow-on Formula Directive was updated in 2006 and it was decided not to add DHA to the required list of ingredients because there was 'no proven benefit'. There is also evidence of possible adverse reactions amongst some infants, which suggests a warning is more appropriate than a health claim. In the United States, manufacturers are required to record and report cases of adverse reactions - and the US Food and Drug Administration had recorded 98 cases itself by 2007. Those backing the baby food industry's DHA claim are lobbying hard to stop the European Parliament voting to improve the health claim approval system - click here.

Research in the public interest should take place to try to reduce the poorer health outcomes amongst babies fed on formula. With regard commercial research there are two different approaches as to how to motivate it.

The health claims approach: Advocates of allowing companies to make health claims have suggested: "In the future, manufacturers might not be willing to invest major financial resources into the development, clinical evaluation and implementation of further improvements, if there is no chance to communicate such improvements." This encourages companies to seek ingredients about which they can make a claim, regardless of the benefits (as with DHA). If improvements have a genuine benefit, then making them optional in this way will mean some babies receive inferior formula.

The evidence-based approach: Baby Milk Action's view is that breastmilk substitutes (the only food for a child for about the first 6 months of life) is too important a product and that adding new ingredients should be based on scientific evidence. Adding ingredients without approval effectively means a mass uncontrolled trial is being conducted on the population at large. Requiring companies to prove ingredients are beneficial and safe will not stop ingredients from being added and will not stop companies from profiting from their investment - advances are generally driven by biotech companies who will find a greater market if their products are added to the list of required ingredients.

If policy makers are serious about infant health, then supporting an evidence-based approach is the way to go.

Alpha-lactalbumin: paper not yet found.

Please contact us if you have further information on the actual research. We would also like to track how this story is reported around the world, so please post links to articles as comments to this blog.