Baby Milk Action asked the Virgin London Marathon for its sponsorship policy and a public statement on Nestlé's sponsorship.

We have been told:

"Nestle will continue as one of the sponsors to the Virgin London Marathon next year (2011).

"The London Marathon’s sponsorship policy is confidential to the organisation of the event including the Race Director, CEO, Board of Directors and Trustees."

Obviously we are also concerned to learn that Virgin London Marathon has a sponsorship policy that allows a company as unethical as Nestlé to pass as a sponsor. We have asked what consideration was given, if any, to ethical concerns over Nestlé's practices and the promotion of its name, particularly given it is the most boycotted company in the UK and this has an impact on many who wish to support the London Marathon. 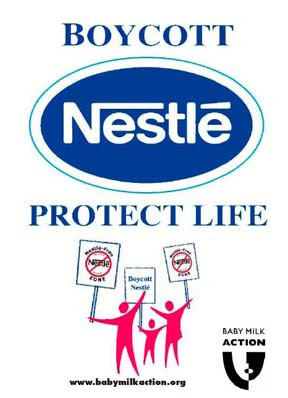 Organisations such as Nelson Mandela's Children's Fund and Breakthrough Breast Cancer have turned down donations (of £250,000 and £1 million respectively) from Nestlé because it conflicts with their funding policies. Nestlé's current Chairman, Peter Brabeck-Letmathé, has clearly stated that the purpose of supporting good causes is to benefit shareholders. Putting those who wish to run the London Marathon, often in support of a charity themselves, in the position where they have to break their boycott or put their health at risk is a pretty disgusting strategy. For further analysis of Mr. Brabeck's view of good causes see:
http://boycottnestle.blogspot.com/2007/03/nestle-generosity-to-good-causes.html

Nestlé is targeted with boycott action over its marketing of baby milk. In its current global marketing campaign, it is claiming its baby milk 'protects' babies and is 'The new "Gold Standard" in infant nutrition'. Babies fed on baby milk rather than breastfed are at greater risk of becoming ill and, in conditions of poverty, more likely to die. Members of the public are emailing Nestlé, but the company has indicated it will continue this strategy, which violates the International Code of Marketing of Breastmilk Substitutes. See the Email Nestlé campaign.

Nestlé is also specifically criticised over its bottled water businesses, as explained in our press release for the London Marathon in 2010.

Nestlé is one of the companies people can vote into the Corporate Hall of Shame in 2010. The nomination states:

"Nestlé – for undermining the human right to water and aggressively expanding its environmentally destructive water bottling operations over the objections of communities globally."

Baby Milk Action would welcome the organisers of the Virgin London Marathon being open about their sponsorship policy and allow people who wish ethical standards to be applied to comment.

Update 22 July 2010 - The Virgin London Marathon has already responded by saying 'no further comment' to our questions regarding why the sponsorship policy is being kept confidential and what consideration was given to concerns about Nestlé's suitability.