According to an advertising company, Nestlé is paying celebrities US$10,000 a tweet to push Nestlé products on Twitter, the social networking site.
This is not the only way Nestlé is attempting to use Twitter. Last year Nestlé caused a public relations disaster for itself by flying prominent parenting bloggers to California to blog and tweet on Nestlé products. People posted tweets questioning Nestlé's business practices, which were raised by the bloggers with Nestlé executives. Nestlé's demonstrably dishonest answers then fueled support for the boycott and a spontaneous Halloween boycott of Nestlé candy called Boo Nestlé.
It has now been revealed that Nestlé pays celebrities to tweet on its products through the 'In-stream advertising' company, Ad.ly. 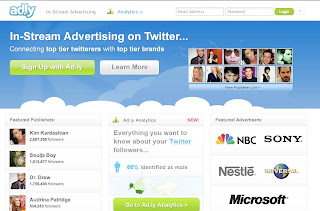 Celebrities are typically paid US$ 10,000 for a single tweet mentioning a product from one of Ad.ly's clients. According to E! online: "Ad.ly, a new company whose sole purpose is to hook up tweeters (famous and otherwise) with ad partners, Kim Kardashian and Soulja Boy both earn that amount every time they tweet for cash, at least when they do it via Ad.ly. (Kardashian recently did a tweet like that for Nestle, says Sean Rad, CEO of the company.)"
According to Gossip Net, Kim Kardashian, who is listed on the Ad.ly site as one of their top 'publishers' has denied receiving funding from another firm for tweeting about a product.
Internet companies also provide tools for corporations to track how their brand is mentioned on Twitter and social networking sites so they can feed their own information into discussions. See:
http://boycottnestle.blogspot.com/2009/10/corporate-trolls-and-spies.html
Posted by Mike Brady at 12:26 pm

Nothing would surprise me from Nestle but I am disappointed that some celebrities care more about making a buck than the children of the world :-(

It sad that celebrities tweeting about a product could sway anyone's decision to buy or not buy a product. Most celebs are (unfortunately) focused on publicity and $. It's not at all surprising to me that formula companies try to manipulate the public any way they can...that's what they do. Unfortunately, it's not about children's health to these companies, but about $$$$$!

doesnt suprise me there are celebs who have no interest or care about anything other than self and thier bubble world, more dissapointing is that people, kids especially arre hyped manipulated to being influenced by celeb culture