Nestlé driving down standards in South Africa and the world

As you are likely to have seen from our May press release, after three attempts we finally received the South African Advertising Standards Authority ruling from Nestlé regarding its shelf talkers. Nestlé promoted its Nan infant formula with signs on the shelves highlighting the 'new' version of the product, which has logos on the labels (which were pictured) saying it 'protects'. In reality infants fed on the formula are more likely to become sick than breastfed children and, in conditions of poverty often encountered in South Africa, to die.

We ask Nestlé to substantiate its claim that the shelf talkers had been cleared as a search did not bring it up on the ASA website and neither Nestlé nor the ASA provided it to us when asked.

The ruling can be downloaded from our website and I have now had time to produce an analysis of Nestlé's response, which can be read at:
http://www.babymilkaction.org/CEMresponses/CEMRapril08.html

While the ruling does indeed reject the complaint about the shelf talkers, it contradicts the position of the South African Department of Health, which says it is usually consulted on such issues and was not in this case.

You can read full details on the website, but one aspect that I want to highlight here is the fact that the complaint about Nestlé's promotion was brought by the Infant Feeding Association.

The Infant Feeding Association was formed at the end of 2003, when the South African government was last considering regulations for the marketing of baby foods. It argued that: "The legislation would infringe on the manufacturers' right to freedom of speech and mothers' rights to information". See:
http://www.thestar.co.za/index.php?fSectionId=129&fArticleId=303940

The aim of the legislation and the International Code of Marketing of Breastmilk Substitutes and subsequent, relevant Resolutions of the World Health Assembly from which it derives actually aims to protect breastfeeding and to ensure that formula is used safely when necessary. The aim is not to stop mothers receiving information, but stop misinformation.

Nestlé argued that its shelf talkers were providing information and the ASA agreed: "The material does not fall within any of the restrictions mentioned in Clause 1.3.2, nor does it contain anything which might be considered to be "sales phraseology". It simply shows pictures of the "OLD" and "NEW" packaging in a factual and informative manner. It isn't likely to induce sales to consumers, but is intended to inform existing customers that the product is now available in new packaging."

However, we support the Department of Health view that shelf talkers should not be permitted.

The shelf talkers are intended to draw attention to the formula. If Nestlé's concern was simply to make it clear the new formula was equivalent to the old, this could have been done on the label. The strategy was to suggest a 'new' formula, offering to 'protect' (a claim highlighted on the labels shown on the shelf talker), was on the market. 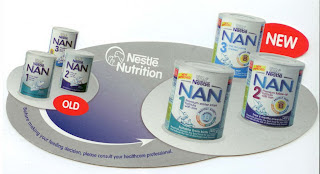 The ruling states: "The complainant submitted, in essence, that the campaign goes beyond informing consumers of a change in packaging by drawing much attention to the brand. This contravenes both the World Health Organisation (WHO) Code and the Code of Advertising Practice, which [sic] practices used to induce sales directly to the consumer at retail level" [I presume it should read 'prohibits practices']

It is significant that both the baby food industry and the Department of Health are critical of Nestlé's promotion.

While we can perhaps take some comfort that some in the Infant Feeding Association are attempting to maintain standards, it is disappointing that the self-regulatory Advertising Standards Authority found for Nestlé as this threatens to drive down standards. If the industry body cannot stop Nestlé from what it views as a violation of the Code, then the worry is they will feel compelled to follow Nestlé's poor example. That is exactly what happened in the US when Nestlé broke a voluntary advertising ban.

The last global monitoring report revealed that the NUMICO companies (Nutricia, Milupa and Cow&Gate) - now owned by Danone - are becoming worse in their violations as they try to compete with Nestlé in Asia.

Nestlé, the largest company in the market, is the cruz of the problem. When we are able to stop Nestlé from driving down standards it can bring substantial benefits.
Posted by Mike Brady at 5:11 pm