Latest news from the campaign to defend the Philippines baby food marketing regulations.

Yesterday I wrote about why I had turned down a request for an interview from a PR crisis management agency. While its approach was on behalf of a charity that is considering entering into partnership with Nestlé and kept its identity secret. The PR agency has also worked for Abbott, part of the reason why I refused the interview request.

Abbott is part of the Pharmaceutical and Health Care Association of the Philippines that has taken the Philippines Government to court in an attempt to strike down baby food marketing regulations implementing the World Health Assembly standards. Other members include Wyeth, Mead Johnson and Gerber.

Nestlé, the would-be partner of the charity that is too embarrassed to even give its name in confidence, is not a member of the Association but has opposed key provisions of the regulations. It is also opposing a draft bill currently passing through congress in favour of another bill in line with its own weaker proposals.

Our partners in the Philippines have petitioned the Supreme Court in support of the regulations. The court had suspended the regulations shortly after the US Chamber of Commerce wrote to the President threatening to cut investment in the country and calling on her to interfere in the court case.

Last week they demonstrated outside the headquarters of companies involved in the legal action, generating coverage in the national press. 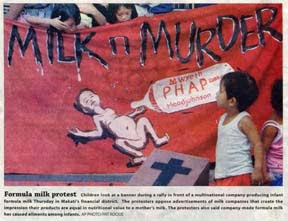 This included mothers who had artificially-fed their children after believing the health claims used to promote formula.

The Philippines Daily Inquirer (16 February 2007) reports: “Despite feeding her son daily with milk products widely advertised on television, Glenda Colasito constantly worried about the sickly 9-month-old baby who could not get over his cough and colds. Putting the blame on artificial milk for her son’s condition, Colasito, with her baby, joined more than 100 mothers in condemning two foreign giant milk companies in Makati City yesterday for “marketing lies” and taking advantage of their vulnerability and poverty.”

According to the World Health Organisation 16,000 infants die in the Philippines every year due to inappropriate feeding. Our partners in the International Baby Food Action Network (IBFAN) in the Philippines are planning to support 150 mothers in filing cases against two companies, Wyeth and Mead Johnson, for violating the existing regulations.

See the news report for more details and watch this space.
Posted by Mike Brady at 8:14 pm

thanks very much for carrying this in your blog!