The scandal of formula and other products contaminated with melamine in China, which resulted in 4 deaths and 54,000 babies hospitalized, was seen as a 'rather positive' situation for Nestlé by Chairman, Peter Brabeck-Letmathé, as he claimed Nestlé products were free of melamine. However, Nestlé was claiming that tests had shown none of its products were contaminated despite one whole milk product being on the contaminated list. Nestlé didn't link to the test results in its press release, but we did in our report posted to the Nestlé Critics website. See:
http://www.nestlecritics.org/index.php?option=com_content&task=view&id=56&Itemid=1

Nestlé is not the only company trying to cash in on the crisis by portraying itself as a 'safe' alternative. The International Code Documentation Centre has issued a legal briefing which examines the approach taken by Abbott in three different countries. These range from providing information onn which products are clear to full-on promotion of brands. The different approaches depend on the level of implementation of the International Code of Marketing of Breastmilk Substitutes. This limits companies to providing scientific and factual information to health workers who are given responsibility for advising parents.

As ICDC states in its briefing, available at:
http://www.ibfan.org/site2005/abm/paginas/articles/arch_art/299-14.pdf 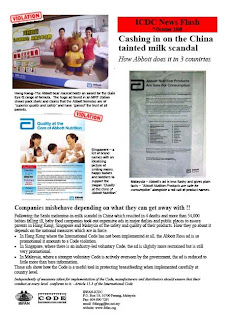 ---quote begins
Companies misbehave depending on what they can get away with !!

Following the Sanlu melamine-in-milk scandal in China which resulted in 4 deaths and more than 54,000 babies falling ill, baby food companies took out expensive ads in major dailies and public places to assure parents in Hong Kong, Singapore and Malaysia of the safety and quality of their products. How they go about it depends on the national measures which are in force.

• In Hong Kong where the International Code has not been implemented at all, the Abbott Ross ad is so promotional it amounts to a Code violation.

• In Singapore, where there is an industry-led voluntary Code, the ad is slightly more restrained but is still very promotional.

• In Malaysia, where a stronger voluntary Code is actively overseen by the government, the ad is reduced to little more than bare information.

These ads show how the Code is a useful tool in protecting breastfeeding when implemented carefully at country level.
---quote ends

The Code, which companies are supposed to abide by independently of government measures, limits companies to providing scientific and factual information to health workers who are given responsibility for advising parents. Authorities can provide this information, such as on the website of the Hong Kong Government's Food and Environmental Health Department, where Nestlé's contaminated milk is listed alongside a list of products that were found to be uncontaminated.

Find out more about the melamine scandal in our Update 41 newsletter, now available online at:
http://www.babymilkaction.org/update/update41.html
Posted by Mike Brady at 7:07 am

From today's Guardian: "In a statement released overnight, the ministry said 294,000 babies across the country had suffered from urinary problems after consuming milk powder laced with melamine. Most received outpatient treatment but 54,000 were hospitalised. In sizable quantities, the substance can cause kidney stones and even failure.

The ministry said it investigated 11 possible deaths related to melamine-tainted milk and ruled five of them out.

But several families are convinced their children died because of tainted formula but have not been counted in the death toll. "When the county health bureau first came to us, they said my child died because of the milk powder," Tian Xiaowei, a farmer from Shaanxi, whose one-year-old son died in August, told the Associated Press.

"But later, when the case was reported to the district health authority, they said there's no proof that the death was linked."

A Beijing lawyer who has aided affected families said he believed even more deaths might have gone uncounted because parents had not reported them. Chang Boyang also told AP there was no word on compensation yet.

"I assume that the government is worried about the situation of the dairies and is afraid the companies may fall if they have to pay for the compensation amid the current financial crisis," he said.

Where is the news about melamine contamination in baby milks in the USA? I can't find anything about it on your website.