Nestlé, one of the world's most boycotted companies, is about to launch a £ 43 million promotional campaign in the UK for Nescafé coffee, the principal target of the boycott.
You can obtain leaflets and posters with the 'Give Nescafé the Boot' logo from Baby Milk Action or download them here:
http://www.babymilkaction.org/resources/downloads.html 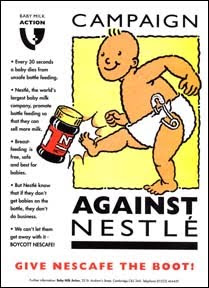 There are many other resources for promoting the boycott at:
http://www.babymilkaction.org/shop/boycott.html
I've posted the following comment on The Guardian website, which has a report on the promotional campaign at:
http://www.guardian.co.uk/media/2009/aug/31/nescafe-nestle-43m-advertising
---
Nescafe is, of course, the principal target of a consumer boycott over Nestle's aggressive marketing of baby foods. Monitoring around the world by the International Baby Food Action Network (IBFAN) - consisting of more than 200 groups in over 100 countires - finds Nestle to be the worst of the companies in pushing breastmilk substitutes in breach of international standards adopted by the World Health Assembly. Such tactics contribute to the unnecessary death and suffering of infants - according to UNICEF 1.5 million babies die every year for not being breastfed - and puts infants that have to be fed on formula at risk.
You can see current examples of malpractice highlighted by the UK group Baby Milk Action - including how Neste labels its formula as 'protecting' babies, when in truth they are more likely to become sick and, in conditions of poverty, to die than breastfed babies. See:
http://www.babymilkaction.org/CEM/cemjuly09.html
As The Guardian has previously reported, Nestle is one of the four most boycotted companies on the planet. See:
http://blogs.guardian.co.uk/businessinsight/archives/2005/09/01/branded.html
In the past it has tried to improve its image by launching a 'fairtrade' coffee - backed by a misleading national advertising campaign which failed to mention that just 0.1% of coffee farmers dependent on Nestle were involved in the scheme. The strategy was widely criticised, not least because Nestle's poor treatment of farmers and role in driving down prices paid to them, is a matter of record. See:
http://www.nestlecritics.org/
Posted by Mike Brady at 5:10 pm