Danone picked up another ruling against its Milupa Aptamil follow-on formula this week from the UK Advertising Standards Authority (ASA). This time it was for its television advertising, which suggests that Aptamil protects babies against infections because it contains IMMUNOFORTIS - a made up name, which is itself an idealizing claim.
Two weeks ago the ASA ruled Danone could not claim that IMMUNOFORTIS protects against infection or that Aptamil is the 'best follow-on formula' and that it had breached the Advertising Code's clauses on substantiation, truthfulness and comparisons. See:
http://boycottnestle.blogspot.com/2009/07/aptamil-not-best.html
Baby Milk Action did not figure in the latest ruling, and we were not aware of or consulted on the draft ruling or invited to submit evidence. This is surprising as we have been complaining about the television advertising to the authorities since it appeared and featured it as an example of malpractice in the monitoring reports we produce for the Baby Feeding Law Group, which are submitted to the ASA. It was listed in the March 2009 report as 'ASA investigating' - but we were not subsequently contacted. See:
http://www.babymilkaction.org/shop/publications01.html#bflgreports
Congratulations to the members of the public who registered complaints with the ASA. Despite these recent rulings, the ASA has a very poor record in even taking up the cases reported to it, generally rejecting them out of hand. It has also rejected the role assigned to it in the Guidance Notes accompanying the Infant Formula and Follow-on Formula Regulations 2007 (see correspondence in the March 2009 report stating: "We have no remit or authority to apply standards to promotions or communications that are beyond the scope of the Codes (regardless of the sector in question) and the ASA Council cannot be bound by the content of a guidance document."
The advertisements show a protective glow around children fed on Aptamil, with the suggestion this wards of germs, such as when other children sneeze on them. 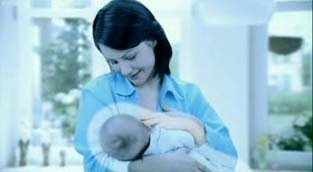 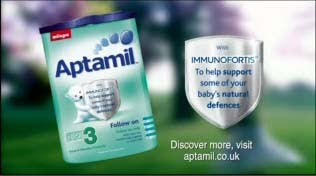