WHO regrets PAHO linking with Nestle

As Reuters reported on 19 October 2012, the Pan American Health Organisation (PAHO) has linked with various junk food companies, including Nestlé.

The World Health Organisation (WHO) has today released a statement distancing itself from the decision to accept money from the food and beverage industry, a decision it describes as "unfortunate".


Moves in 2011 by the WHO Director General to set up a multi-stakeholder public health forum were opposed by Member States and public interest organisations such as Baby Milk Action and the International Baby Food Action Network (IBFAN), leading to WHO to take a clearer stand on conflicts of interest.

WHO's statement on PAHO's link to Nestlé and other companies states:

WHO does not accept funds from the food and beverage industry for its noncommunicable diseases work.

It is unfortunate that the Pan American Health Organization (PAHO-WHO) has accepted money from the food and beverage industry.

PAHO - while it is a WHO regional office for the Americas – is, unlike the other regional offices, also the health agency of the Organization of American States. Therefore in some areas, PAHO has its own operating guidelines. Not all PAHO guidelines are aligned with WHO. One such area is collaboration with the private sector.

Nestlé systematically undermines public health messages by, for example, claiming its formula 'protects' babies, when babies fed on formula are more likely to become sick than breastfed babies and, in conditions of poverty more likely to die (example below, Nestlé advertising Nan formula on television in Armenia in 2011). It also refuses to bring instructions on preparing formula into line with WHO guidance, so denying parents information on how to reduce the risks from the possible intrinsic contamination of powdered infant formula, which is not a sterile product. 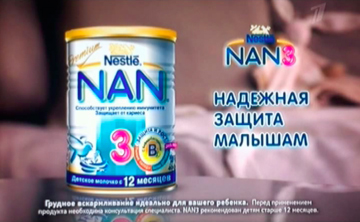 "It is welcome that WHO has come out against PAHO linking with the food and beverage industry. Nestlé is desparate to undermine controls on its marketing practices, which contribute to the unnecessary death and suffering of infants around the world and to the global rise in obesity and non-communicable diseases. As I speak, it is attempting to undermine strong baby milk regulations introduced in the Philippines. Nestlé invests heavily in trying to promote itself as a "health, nutrition and wellness" company to distract from its unethical marketing of baby milks and the high sugar, salt and fat content of many of its junk foods. It also attempts to sponsor civil society organisations, health workers, government programmes and UN initiatives to neutralise them as critics or regulators and to gain kudos by association. Governments should govern and corporations should follow the rules. It is very welcome that WHO Member States rejected a proposal last year to set up a multi-stakeholder forum that the same junk food companies were clamouring to be part of.

Baby Milk Action helped to set up the Conflicts of Interest (COI) Coalition and invites other concerned organisation to endorse the statement calling on public interest organisations to put the public interest first and maintain their independence from the corporate sector. See:
http://coicoalition.blogspot.co.uk/

The intervention by Patti Rundall, Policy Director of Baby Milk Action, at the World Health Organisation Executive Board meeting in 2011 regarding the proposed multi-stakeholder forum, which has since died a natural death, raises some of the key issues about conflicts of interest with particular reference to infant feeding. See:
http://info.babymilkaction.org/policyblog/speeches
Posted by Mike Brady at 6:48 pm

Whst about the advertising of Aptamil on TV in UK, is this not contrary to WHO guidelines?

Yes, we have reported Danone's advertising on UK TV to the relevant authorities - though these measures are largely ineffective as the UK Government has yet to act on repeated calls to implement the International Code and Resolutions in national legislation.

For analysis of violations in the UK by Danone see:
http://www.babyfeedinglawgroup.org.uk/reports/danone.

Through campaigning we have been able to win some changes - for example, Danone promised in May 2012 to stop distributing leaflets targeting to the public through the health care system. We are monitoring carefully to see if it delivers on this promise.

We welcome the public reporting violations in the UK to us via the above site.