A representative of the Hipp baby food company was interviewed on BBC Radio 4 You and Yours programme on 5 November 2012, together with Dr. Helen Crawley of the First Steps Nutrition Trust (click here to listen again).

The discussion was about the refusal of Hipp to provide correct guidance on how to reconstitute its powdered infant formula. The facts, as Dr. Crawley explained, are clear. The Department of Health confirmed its guidance had not changed, despite Hipp claiming in the programme that it had been given permission to flout the guidance.

Powdered formula is not sterile and may contain harmful pathogens, such as cronobacter sakazakii (previously known as enterobacter sakazakii) and salmonella. Although studies have found contamination levels as high as 14% of tins (research cited by the US Food and Drugs Administation), ill effects are very rare, but can included meningitis and death.

The risks can be reduced by killing the bacteria by reconstituting the formula with water above 70 deg. C. In practice this temperature can be achieved by boiling a full kettle and allowing it to cool, but for no more than 30 minutes. The formula should then be allowed to cool to a safe temperature before feeding. The following resources provide this information:

A clear leaflet to follow if you are using formula (Hipp or any other) or advising parents, can be downloaded from the Department of Health - click here.

The World Health Organisation Guidelines for the safe preparation, storage and handling of powdered infant formula are also clear about using water above 70 deg. C. Its report includes background information on the risks and the reasons for the guidance - click here.


Despite the clear guidance for parents from the Department of Health and WHO, Hipp told Radio 4 that the guidance is unclear.
Why is Hipp putting babies at risk by telling people to use water at a lower temperature on its labels? 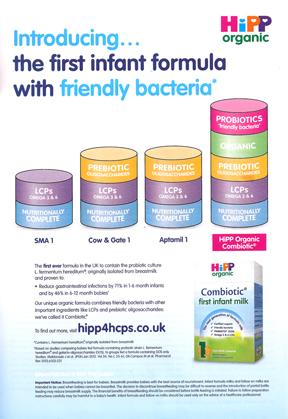 It comes down to its own profits and marketing campaigns. Hipp's current advertising and promotion is based on so-called probiotics added to its formula. There is no proven benefit of adding probiotics to formula, despite the impression given by Hipp in advertising such as that shown below (left, advertising to health workers, exposed on Baby Milk Action's Campaign for Ethical Marketing action sheet September 2012).

The First Steps Nutrition Trust guide to Infant Milks in the UK was updated in November 2012 to include information on Hipp's new probiotic formula and states:

A few clinical trials have shown health benefits for specific bacterial strains, however, on the strength of a review of randomised control trials in healthy term infants, the ESPGHAN (European Society of Paediatric Gastroenterology, Hepatology and Nutrition) Committee on Nutrition have found that there is too much uncertainty to draw any reliable conclusions on the efficacy of probiotics in infant milks. They did not recommend their routine use in formula milks for infants.

Water hot enough to kill harmful pathogens will also kill the probiotic bacteria and this is the reason Hipp is trying to hide the risks and ignore the safety guidance.

However, in doing so, Hipp is showing its contempt for the Infant Formula and Follow-on Formula Regulations (2007), adopted by the four countries of the UK. The Guidance Notes from the Food Standards Agency that accompany the Regulations and "shows how the regulations should be interpreted" is also very clear:


Labelling relating to the preparation, storage and disposal of infant formula and follow-on formula

24. Regulation 17 (1)(d) and 18(1)(d) require that instructions are provided for appropriate preparation, storage and disposal of the product. The Agency recommends that these instructions should include information noting that:

• Powdered infant formulae and follow-on formulae are not sterile, and as such can contain harmful bacteria. It is therefore important to be very careful when preparing formula to reduce the risks. Boiled tap water (not bottled water) cooled for no more than 30 minutes should be used to prepare infant feeds.

• All equipment used for feeding and preparing feed must be thoroughly cleaned and sterilised before use, and bottles should be made up fresh for each feed, as storing made-up formula milk may increase the chance of a baby becoming ill.

25. Further advice about the preparation and storage of formula can be found at the website below: http://www.breastfeeding.nhs.uk/en/materialforclients/index.asp (advice to consumers) http://www.dh.gov.uk/en/Healthcare/Maternity/Maternalandinfantnutrition/DH_ 4123674 (advice to health professionals)

The links mentioned in the Guidance Notes take you to the Department of Health booklet on formula feeding mentioned above, which states:

Even when tins and packets of powdered infant formula are sealed, they can sometimes contain bacteria such as Cronobacter sakazakii (formerly know as Enterobacter sakazakii) and more rarely Salmonella. Although these bacteria are very rare, the infections they cause can be life-threatening.

To reduce the risk of infection, make up each feed as your baby needs it, using boiled water at a temperature of 70oC or above. Water at this temperature will kill any harmful bacteria that may be present.

Unfortunately, the regulatory authorities in the UK are not acting to enforce the regulations.

As Baby Milk Action also recently reported, the Advertising Standards Authority (ASA) is also failing to protect babies and their families in the UK when it comes to misleading claims made in advertisements. For example, it refuses to even investigate advertisments like that shown above. See our 24 October 2012 press release.

What can you do?