Fairtrade Fortnight is taking place from 22 February to 7 March. If you would like to support this, you can find out more at:
http://www.fairtrade.org.uk/
As you may know, Nestlé has gained Fairtrade certification for 4-finger KitKat. There are 6,000 farmers benefiting, gaining about an extra £400,000 per year from the Fairtrade premium. Nesté's has already received global publicity for this sum, which is a fraction of the price of its curent £43 million Nescafé UK advertising campaign. But much of the coverage is undeserved as Fairtrade KitKat involves just 1% of the cocoa Nestlé purchases while it is criticised for failing to deliver on its promise to end child slavery in the supply chain for the rest by 2006.
http://boycottnestle.blogspot.com/2010/01/fairtrade-kitkat-launch.html
You can find a simple leaflet with facts that Nestlé executives do not want you to know about Nestlé and cocoa - and its pushing of baby milk. Why not download it, print it back-to-back to make A5 copies and use them on your Fairtrade stall if you are having one, or give to friends.
http://www.babymilkaction.org/pdfs/nestlefairtrade0210.pdf 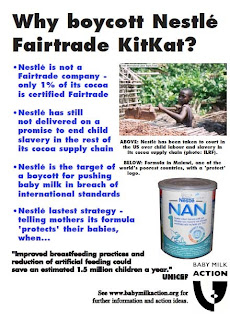 Nestlé is the worst of the baby food companies. As it boasts about the new Fairtrade logo added to KitKat, we are campaigning to force it to remove new logos from its infant formula that claims this 'protects' babies - it does not, babies fed on it are more likely to become sick than breastfed babies and, in conditions of poverty, are more likely to die.
Nestlé is not only trying to improve its image by promoting its Fairtrade KitKat, it is about to embark on a multi-million pound campaign in cyberspace. See:
http://boycottnestle.blogspot.com/2010/02/nestle-launches-cyberwar.html
Nestlé is one of the world's four most boycotted companies because people like you spread the word. This is why Nestlé is stepping up its spending on trying to improve its image. And this is why we need your help more than ever - with the financial crisis we have lost some members and had to cut staff hours. By becoming a member, sending a donation or buying something from our online shop, you help to keep us operating. See:
http://www.babymilkaction.org/shop/
The more we can do, the more cases of aggressive pushing of formula we can stop (by Nestlé and other companies) and the more laws we can bring in and defend (there are over 70 countries now with laws). The more people support the boycott, the more Nestlé has to spend trying to counter it, which tips the balance towards it actually making the changes required to bring its practices into line with the marketing requirements adopted by the World Health Assembly. Join those sending messages to Nestlé about its 'protect' logos and eventually it will drop them as it has with many of the other strategies we have exposed. See:
http://www.babymilkaction.org/CEM/cemjuly09.html
So if you can, please click here. We don't need the millions Nestlé spends to have an impact. Membership starts at just £7 and every member makes a big difference.
Posted by Mike Brady at 12:41 pm

Labels: Fair Trade, Nestle boycott, The blog and other services