The following article is from Jess Haigh, who campaigned against the scrapping of the Nestle boycott at Sheffield University this month.
http://boycottnestle.blogspot.com/2009/03/sheffield-student-boycott.html
---
Recently, in response to an upcoming student referendum on the issue, we ran a successful “Vote No to Nestlé” campaign at Sheffield Union, in order to promote the continuation of its Nestlé Boycott. 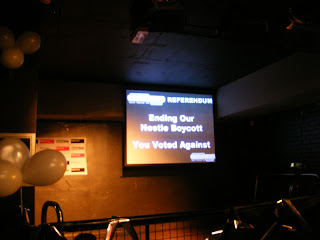 We are very happy with the result as the removal of the Boycott would not only have been seen as a victory by Nestlé but it would have allowed Nestlé to use our example to persuade other Unions to do the same. Unfortunately, the voting was very close – we only won by 258 votes. This was perhaps due to the wording of the referendum, which suggested we should “engage” with Nestlé on baby milk issues, making it sound like a positive step. Despite the negative implications of such a tight result, it does show how worthwhile it is to run a campaign, as it is unlikely the Boycott would still stand had we not bothered.

There is probably a lot to be learnt from our mistakes in our campaigning – had we noticed the referendum earlier we could have run a much more thorough campaign, and got more people involved. Having a large campaigning group means you can have a good presence on campus, but because of the late notice we gathered up little support, and a two person campaign will only reach so many people.

One thing that was particularly disheartening was the usual comments of “I like Nestlé”, but generally these were the kind of people that would not be converted to the cause. They either already knew of the issues, and liked their precious Kit Kats too much, or just weren’t interested. The best results we got were from people who did not really know about the issues – it was very uplifting to have people stop and ask questions. Even if the campaign had failed, at least we would have managed to increase awareness about Nestlé’s malpractices.

Our campaigning was made particularly hard by the wording of the referendum. Obviously it is a ridiculous idea that one small Student’s Union dropping the boycott and “engaging” with Nestlé will make Nestlé turn around, confess to all their wrongdoings, and completely reform the company, yet on paper it sounded pretty persuasive. As well as general awareness of the boycott, one of the most important things was telling people about the uselessness of this “engagement” method.

Generally the most important thing we found in running a campaign like this was just getting the word out, and making people aware of the campaign. The best way to do this is to get as many people as possible involved, with handing out leaflets, putting up posters, and just talking to people about the issues. Also take advantage of all opportunities to speak about the issues – we spoke at the Union Election’s hustings, and through that managed to get word out to about 300 people at once. Baby Milk Action helped us with evidence and its website is also a useful source of information: http://www.babymilkaction.org/ 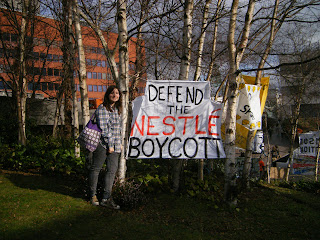 By continuing the Boycott, we are sending a message to Nestlé that people are still aware of, and bothered by, their malpractices. Nestlé will care about this result – if they were unfazed by Union Boycotts like ours then they would not have spent precious resources, through sending 5 company representatives, in order to convince the Union to drop the Boycott. The success of our campaign, particularly given the small scale at which we ran it, shows that it is relatively easy to spread awareness about issues like this, and that campaigning does make a difference, and is always worth it.