Nestlé's pretence for trying hi-jack the website we launched for International Nestlé-Free Week (4 - 10 October) was the absurd claim that it was "passing off" as a company website.

Aside from it being obvious when visiting the preview site (and the current site) that it was not a Nestlé website (and it directed people to the company website for the company's words), the meta data for the site, used from the beginning, makes it clear it is not a company site.

Meta data is invisible on the page, but is used by search engines in their listings. An example of this is shown in the screen shot below. This is for a Google search on 'Nestle and melamine'. We have been getting a lot of traffic to the site from this and similar Google and other searches and so I was interested to see how the listing appeared.

On the second page the top item is:

---
Nestlé
Nestlé reaffirms that all our milk products in China and Hong Kong are absolurely safe, and none are made with milk adulterated with melamene.
---

The next item is:

---
Nestlé's 'no melamine found' found in products claim examined
Nestlé's actions speak louder than its words. Visit this site for information on concerns about Nestlé practices.
---

It is the meta data that appears under the article headline. 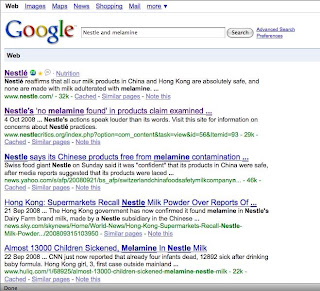 I happen to think it is clear which is the Nestlé site and which is not a Nestlé site. The whole point of the site is to provide objective, independent information to people who want to know if Nestlé's words are reflected in its actions.

To further deflate Nestlé's pretence, we are promoting the site with the domain name:
http://www.nestlecritics.org/ rather than the previewed Nestlé's Actions domain name.

We haven't handed the old domain name over to Nestlé however, as we have good reason to be suspicious of what it would put on the site - it has previously hired a secret agent to "pass off" as an activist to gather information on campaigners.

In its press release appearing in the search results above, Nestlé referred to a testing report from The Hong Kong Government's Food and Environmental Health Department. You can find it from a link on the Nestlé Critics site (though curiously there is no link from the press release on the Nestlé company site). There, on the "Unsatisfactory results of testing of Melamine" list, is a Nestlé whole milk. See:
http://www.nestlecritics.org/index.php?option=com_content&task=view&id=56&Itemid=1

The site is providing a valuable service and, thanks to the way search engines work, people are able to find information they may find useful. Information that very clearly is not coming from Nestlé, but from those with concerns about Nestlé practices.

The site is also being promoted around the world. For launch information in Swedish, for example, see:
http://www.vardforbundet.se/templates/VFArticlePage4.aspx?id=23117

Please do link to :
http://www.nestlecritics.org/
Posted by Mike Brady at 11:17 pm

Labels: Nestle boycott, The blog and other services

Thank-you Mike for your wonderful blog and resources.

I have been boycotting throughout the years and encourage moms in my practice to do the same.

We need to be vigilant in our efforts to educate and support women to breastfeed and make informed decisions about the safety of artificial baby milks.

Our future depends upon it.