Heinz demonstrates its contempt for parents, facts and the law with its 'Nurture' formula launch

If you are in the UK you may have witnessed the strategy that Heinz has used for launching and promoting its new Nurture infant formula. It is positioning this as closer to breastmilk (something it reportedly claims explicitly on its telephone 'carelines') to justify a massive price increase of typically £3 per tin. This price hike is a betrayal of its past promotional message of 'committed to low prices':
http://boycottnestle.blogspot.com/2008/07/heinz-farleys-betrayal.html

Heinz is neither committed to low prices, nor to telling the truth about its formula or respecting the law. If you believed the advertising campaign you would think formula feeding protects babies. That's the message of a television advertisement: 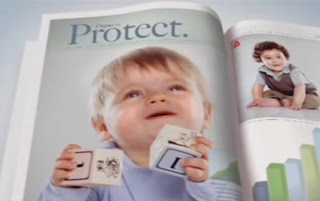 It's in the new slogan for the formula too: 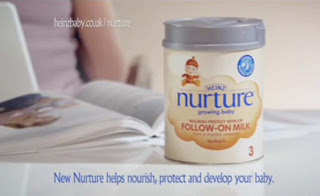 the voice over to the television advertisment states: "As it grows, a baby needs a special combination of nutrients to sustain the incredible growth in its brain, body and immune system. To provide for those three essential aspects of growth Heinz created new Nurture an advanced complete follow-on formula to help nourish, protect and develop your baby."

Heinz plays very strongly on the idea that infants fed on the formula will be protected. But, formula does not provide what is essential as infants fed on formula are more likely to suffer from short and long-term illness. They are more likely to be hospitalised with gastroentiritis. They are also at risk from possible intrinsic contamination as Heinz has not given the necessary information on reducing this risk. Powdered formula is not sterile, but no doubt the marketing people thought that telling parents this and how to reduce the risks might tarnish the idea that the formula 'protects'. See:
http://boycottnestle.blogspot.com/2007/02/powdered-infant-formula-is-not-sterile.html

In advertising health workers, Heinz makes many other claims for the benefits of the formula, including implying it is an intervention for use when babies are constipated.

On the labels Heinz adds claims about ingredients, including the illegal claim about 'prebiotics'. Heinz has already been warned before that this is not on the permitted list, but will the authorities do anything to hold the company to account? 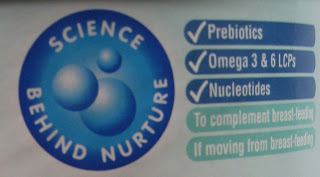 We have reported the television advertisement to the Advertising Standards Authority. Please let us know when and where you see the advertisement. You can also report it yourself. Find out details at:
http://www.babyfeedinglawgroup.org.uk/monitoring.html

But from our past experience of the ASA and the regulatory framework in general, little is likely to be done. Why? Because the label of the formula as shown in the screen shot of the advertisement is orange. The UK framework is really that useless.

This the range of formulas, as promoted on the website given in the television advertisement, which parents are expected to visit for further information:

It doesn't matter that parents won't make the connection. Indeed, from past experience, the enforcement officers may not even be able to tell what formula is being advertised, but if Heinz tells them it is follow-on formula, then they say they can do nothing. That was exactly what happened when we reported a past Heinz/Farley's advertisement, which appeared on the Discovery Health channel.

After our complaint was rejected we requested information from Ofcom (the responsible for television advertising) using the Freedom of Information Action. This is what we found in the correspondence between officials:

“I was unable to work out the precise product pictured in the video footage.”

“I don’t know what product appears in the credits as no information is given on the pack shot. Discovery have told us that the product was follow-on formula.”

We have sent this information to the review panel that is looking at the effectiveness of the Regulations. We have been calling for years that all formula advertising be advertised, in line with the International Code of Marketing of Breastmilk Substitutes, adopted by the World Health Assembly in 1981. 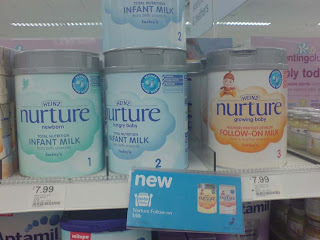 The formulas on the left are infant formula. So no separation of formula types and follow-on promotion with the formula.

Is anything likely to be done?

The signs are not good as the Trading Standards Home Authority responded to point-of-sale promotion for Wyeth/SMA formula (shown in our May 2008 monitoring report) by stating:

"It may not comply with good practice in the guidance notes, but it does not infringe the 2007 Regulations. Therefore enforcement action cannot be taken."

The Baby Feeding Law Group was assured by the government that the Guidance Notes would be enforced. Now it seems they are beeing taken as 'good practice' and no action will be taken.

This is the situation we face in the UK and it is only by exposing it that we can hope of making progress in closing the loopholes. The above case, the recent strategies and the action (or lack of it) by authorities are something we wish to publish in a monitoring report, but for this we need funding. At present we have no funding for UK work. Indeed, this blog fell silent these past few days because I was working on putting the report together to send to the review panel, alongside a second job and other Baby Milk Action work (which is funded). In a very real sense, funding means staff hours, better publications and a more effective campaign. I don't mind giving time voluntarily - I have always done so and we rely on volunteer supporters to help with monitoring. But there are only so many hours in the day. If we have funding, they can be put to this work. Similar strategies are used around the world, so what we expose in the UK and the monitoring systems we have and are developing, is useful globally.

Donations to the BFLG monitoring project can be made through our on-line Virtual Shop at:
http://www.babymilkaction.org/shop/donation.html#bflg

Alternatively, particularly if in the US, donations can be made via the Latch.On website at:
http://www.latchon.org/projects.htm?mode=view&rid=10071
Posted by Mike Brady at 8:57 pm

This type of thing really highlights how gaping the holes are in the UK law. It's much the same here in Ireland, I've lodged complaints before with the FSAI (Food Safety Authority) about advertising to pregnant women & newborn mums, and the FSAI basically said "As long as they don't specifically say "infant formula" we can't stop them", wonderful!

Anyway, keep up the good work, it makes a difference!

I renewed my membership with Baby Milk Action a couple of weeks ago and I will be doing some of my Christmas shopping soon in your online store, so I'll send a few more shillings your way then :)

I was in Boots yesterday and saw the shelf talker.

Glad to see Baby Milk Action is working on this.

This "nurture" campaign is one of the most cynical and misleading campaigns yet. Drawing on subliminal references to the nature v nurture debate AND, they hoiked the price up so that it would be perceived as this advanced and improved product. Which it is, the mums may have complained about the price, but it's the one they want to buy.

The whole thing is very sinister and manipulative on so many levels - and dare I say almost trying to appeal the demographic in the market who have the highest breastfeeding rates in the uk.

I will my renew membership tomorrow ... this has to be stopped.

Keep up the good work.

I was in France recently and saw formula in supermarkets there ranged in price from 15 euro to 22 euro for a 900g tub (so roughly £13-£20?). My theory is that Farley's was "holding back" the price of formula in this country and following the launch of Nurture, the price will creep up across the board.