Sanlu pushed formula in China in breach of international standards

The International Code Documentation Centre - part of the International Baby Food Action Network (IBFAN - Baby Milk action is the UK member) has issued a press release about the Fonterra/Sanlu scandal of selling contaminated formula in China.

ICDC coordinates IBFAN's global monitoring project and points out that Fonterra/Sanlu has promoted its formula in breach of the International Code of Marketing of Breastmilk Substitutes, by, for example, offering gifts on purchase of infant formula (see the image below).

ICDC also questions the public statement from Fonterra that it called for action to be taken in August 2008, by which the New Zealand company is attempting to distance itself from responsibility for the company in which it holds a 43% share. ICDC states that the first cases were known about in March 2008.

Here is ICDC's press release, which can be downloaded as a pdf by clicking:
http://www.ibfan.org/site2005/abm/paginas/articles/arch_art/560-1.pdf

The whole world recoiled in horror at the recent Sanlu milk scandal in China: over 6,000 babies ill, including more than 150 in critical condition, and four deaths. News that melamine, a toxic chemical was deliberately added to local brands of baby milk to falsify protein levels have compelled Chinese parents to seek imported brands.

Responding to this, well-known foreign brands have reportedly requisitioned more stocks from abroad to meet the surge in demand. What people are failing to see is that artificial feeding itself is a risk to infant health. Records compiled by IBFAN-ICDC show that foreign brands also are susceptible to contamination.

Serious questions about the safety of such products have been raised time and again in many countries, not just in China. The World Health Assembly has in recent years adopted several resolutions regarding the dangers of intrinsic contamination of powdered infant formula but these red flags have been swept under the carpet or hushed up by companies so as not to affect sales and profits. Now they are riding high on the anxiety of Chinese parents.

In the wake of the Sanlu tragedy, the government is looking for culprits. Although it is imperative for those guilty to be publicly charged, it is even more important for China and the rest of the world, to take serious stock of the inherent dangers of bottle feeding and work towards having more mothers opt for breastfeeding instead. Apart from giving consumers up-to-date and consistent information about infant and young child feeding, including the risks of formula feeding, vigorous steps must be taken to ensure that mothers can make decisions free of commercial influence.

China has had national regulations which implement the International Code of Marketing of Breastmilk Substitutes since 1995 but the lack of enforcement means that companies have been able to treat the regulations with impunity and behave as if no law exists. 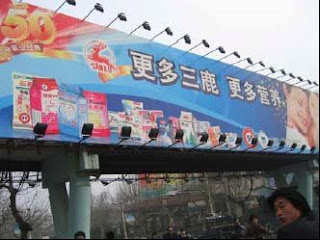 Sanlu is 43% owned by the New Zealand Fonterra company which claims it has warned Sanlu since August 2008 about suspected contamination. Yet the first complaints over sick babies came in March 2008. 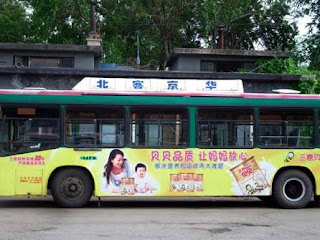 A bus on one of the busiest routes in Beijing serves as a mobile ad for Sanlu “the best selling infant formula for 12 years”.

Such advertising is forbidden by the International Code. 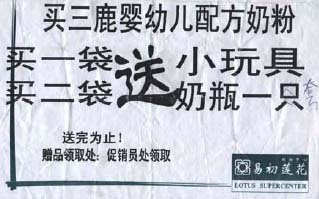 Promotion in a China store: Buy one bag of Sanlu infant formula and receive a toy. Buy two bags and get a feeding bottle.

Such gifts are a violation of the International Code.
The pictures show how Sanlu, imitating foreign brands, aggressively promotes its products to Chinese mothers and turns them away from the age-old tradition of breastfeeding.

Breastmilk is the optimal food for babies from birth up to the age of two years. It has the correct amount of nutrients, it is safe and hygenic, does not require sterilisation or preparation. It is available for free but it is not being promoted. Instead, aggressive marketing of cow’s milk formula has made mothers oblivious to all the benefits of breastfeeding.

The Chinese officialdom has stepped in to address quality of milk. That they must do but they must also pour in resources for activities which promote, protect and support breastfeeding.

To see the full Recall List of contaminated baby milks, click the link:
http://www.ibfan.org/site2005/abm/paginas/articles/arch_art/85-24.pdf
Posted by Mike Brady at 10:40 am