Wyeth is embarking on yet another national advertising campaign for its SMA formula.

This must be costing millions of pounds - a bill ultimately paid by those who buy formula.

The subvert below made me think about how much mark up there is on formula. 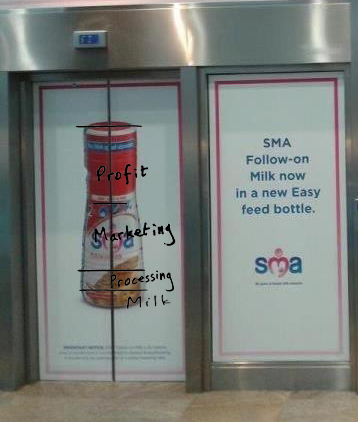 Companies won't reveal the breakdown of their costs, so the calculation below is based on speculation.

The dairy farmer will have received less than 7 pence for the milk (according to Farmers for Action farmers currently receive 27 pence per litre for milk from processors - click here).

Changing the fat content, pasteurising, packaging and distributing whole milk costs about 3 pence for 250 ml (Farmers for Action figures suggest 27 pence processing costs for 2.3 litres). Let's speculate and say that changing the protein content, adding vitamins, extracts from algae (LCPs) and other additives triples the processing costs of formula milk compared with whole milk. That would be 9 pence for 250 ml. This would make the total cost of the milk and production 16 pence per 250 ml.

The remaining 73 pence of the 89 pence selling price will be split between company and retailer profit and the costs of marketing, including advertising campaigns, baby clubs, "carelines", events for health workers, and other promotion.

Although marketing figures are hard to come by, it is known that Wyeth awarded a contract for £2 million to a PR agency in 2008 for targeting pregnant women, new mothers and health workers. In 2012 it must surely have already spent far more than this, having run two national billboard advertising and mass media campaigns by the end of July and planned the SMA Baby Know How roadshow to launch its new formula packaging (which was cancelled following protests).

Wyeth already has a criminal conviction for breaking advertising regulations and complaints have been upheld by the Advertising Standards Authority. Its Self-serving Marketing Activities benefit no-one and inflate prices through the costs of these and by positioning the product with misleading, idealising claims.

All formulas on the UK market have to comply with composition regulations and optional ingredients (which have been added to most formulas) have no proven benefit, so there is no health advantage from buying more expensive formula.

Formula is said to have the highest profit margins of any product on the supermarket shelves. For example, New Zealand’s Economic Development Minister Gerry Brownlee stated in October 2010: "A kilo of infant formula is worth ten times the value of a kilo of milk powder, so it’s obvious which product New Zealand should be selling."

These are obviously rough calculations, but not for nothing are hundreds of people signing the 'No promotion - Cheaper formula' petition on Change.org at:
http://www.change.org/petitions/baby-milk-companies-no-promotion-cheaper-formula

If you can help improve this calculation, please contact Baby Milk Action.
Posted by Mike Brady at 9:44 am