We want Nestle out of the London Marathon - Facebook group 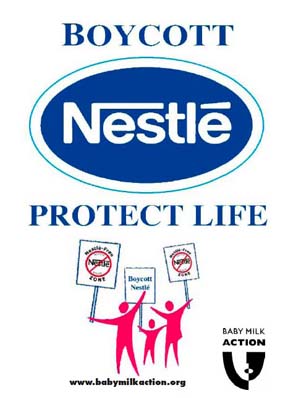 Nestle is the most boycotted company in the UK and its strategy it to try to improve its image and put boycott supporters and other campaigners in a predicament: withdraw from the marathon, endanger their health by not accepting water or break their boycott.

Nestle is the target of a boycott (and one of the four most boycotted companies on the planet) because the way it pushes baby milk. It breaks international marketing standards adopted by the World Health Assembly, undermines breastfeeding and puts babies that have to be fed on formula at risk.

Nestle pretends this is an issue of the past, but its current global marketing strategy is to promote its baby milk with the claim it 'protects' babies. Nestle knows that babies fed on its formula are more likely to become sick than breastfed babies and, in conditions of poverty, more likely to die. Its claims undermine the obligatory 'breastmilk is best for babies' message that the boycott helped to bring in. You can send a message to Nestle about this at:

Nestle is also refusing to warn on labels that powdered formula is not a sterile product and the simple steps required to reduce risks of possible contamination with bacteria. Even babies fed on baby milk in the best conditions have died of such contamination. The World Health Organisation has issued guidelines for reconstituting formula to reduce the risk, but Nestle refuses to change its labels. See: http://www.who.int/foodsafety/publications/micro/pif2007/en/index.html

Nestle bottled water business is the target of campaigners around the world for the harm it causes to their communities. In Brazil, Nestle's bottling of Pure Life water damaged an historic water park, prompting residents, dependent on the park for their livelihoods, to petition the public prosecutor to take action. Nestle was taken to court and eventually stopped pumping under the threat of daily fines - but it took 10 years of campaigning. See:

For concerns about Nestle's bottling in other countries, particularly the United States, see the water section of the Nestle Critics website:

The Nestle Critics site also has information from groups campaigning about Nestle failure to deliver on its promise to end child slavery in its cocoa supply chain by 2006, its use of palm oil implicated in destroying Indonesian rainforest (Nestle has said it will stop this following a Greenpeace campaign - but only by 2015), trade union busting, spying on campaigners and other concerns.

Supporting the campaign to remove Nestle from the sponsors of the London Marathon will help draw attention to its malpractice and add to the pressure for it to change.

Most people who run the Marathon do so because they want to contribute to good causes.

Nestle is not an appropriate sponsor.

Nestle's Chairman, Peter Brabeck-Letmathé, has stated clearly that companies should only pursue charitable endeavors with an underlying intention of making money for investors (see Boston Herald).